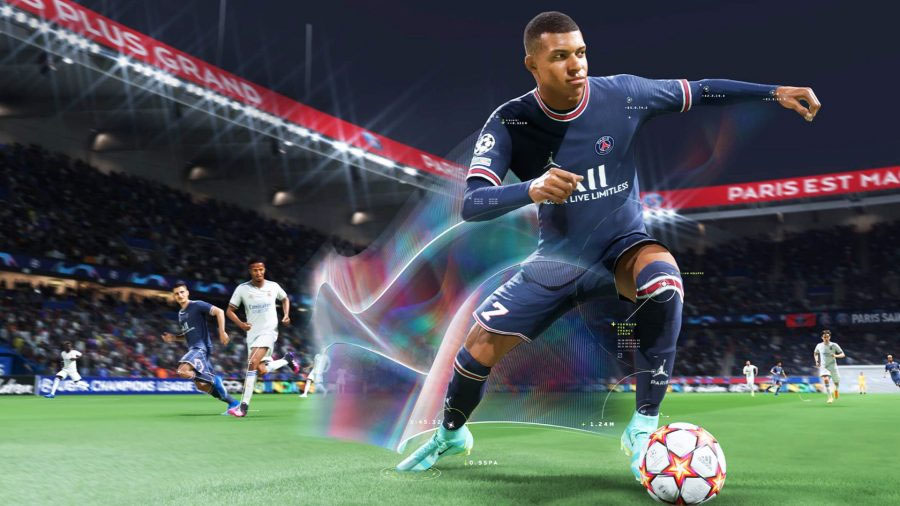 As promised, ahead of EA Play Live, we got our first official look at FIFA 22. Before we get into the details of what makes FIFA 22 different, let’s talk about the release date.

FIFA 22 will be available worldwide on October 1 for PlayStation and Xbox consoles, PC, and Stadia. This year’s installment in EA Sports’ annual soccer video game franchise promises to bring “football’s most realistic and immersive gameplay experience to life.”

How will they be doing so, you may ask? With a new next-gen technology referred to as HyperMotion. Only available on PS5, Xbox Series X|S and Stadia, HyperMotion technology is a fancy way to refer to EA’s method of motion capture.

HyperMotion technology enabled the integration of the first-ever motion capture of 22 professional footballers playing at high intensity. Additionally, EA’s proprietary machine learning algorithm learns from more than 8.7 million frames of advanced match capture, then writes new animations in real time to create organic football movement across a variety of interactions on the pitch. Whether it’s a shot, pass or cross, HyperMotion transforms how players move on and off the ball.

Unfortunately, this groundbreaking new gameplay technology is only available on next-gen systems. So even though FIFA 22 will be available on PS4 and Xbox One, only the PS5 and Xbox Series X|S (and Stadia) versions will experience this sort of elevated gameplay.

While this may disappoint last-gen users, it’s not totally unexpected. EA revealed something similar with Madden 22’s Dynamic Gameday feature, which is also exclusive to next-gen consoles.

HyperMotion seems to be much more integral to the overall gameplay of FIFA 22, however. While Dynamic Gameday offers a unique feel and deeper level of strategy to Madden 22‘s gameplay, it seems HyperMotion truly revolutionizes FIFA‘s gameplay. If you’re looking for a truly new experience, this is it.

I know EA gets a lot of flack for FIFA being “the same game every year,” but HyperMotion looks like the actual next step in the franchise. After FIFA 21 was criticized for being a transitional game from last-gen to next-gen, FIFA 22 finally looks and seemingly feels like a true next-gen gaming experience.

Matches should feel more authentic, fluid and real. EA promises to unlock the “raw emotion, passion and physicality of the world’s game.” As exciting as all of this sounds, I’m cautiously optimistic because we know any sort of new technology can result in some wonky gameplay. I’m hoping that won’t be the case here, but I do want to temper some expectations.

Beyond HyperMotion, FIFA 22 is said to offer “deep and innovative features” across FIFA 22’s various game modes, including Career Mode, VOLTA Football, Pro Clubs and Ultimate Team. The improvements to each of these modes will likely be detailed over the next couple of months, but EA did provide an overview of some exciting new improvements on the way:

FIFA 22 will be released on October 1, and is available for pre-order now. Dual Entitlement, which provides a free upgrade from last-gen to next-gen, will only apply to the Ultimate Edition of the game. The Ultimate Edition also includes four days early access, a FUT Heroes player item (only if you pre-order by August 11), FIFA Points and more.