The council members all have a shared health pool

Veras Darkshadow is a rogue-like enemy and will perform a Vanish approximately every 60 seconds, removing the boss from combat for the next 30 seconds. While vanished, Veras will apply Deadly Poison to random raiders, dealing 1000 nature damage every second for 4 seconds. As each poison debuff ends, he will use Envenom on the player afflicted with Deadly Poison dealing 4250 nature damage. Once Veras comes out of stealth, he will need to be picked up very quickly by the assigned tank before he kills any of the more vulnerable players. A quick pickup can be difficult if Veras is buffed with either Blessing of Protection or Blessing of Spell Warding from Gathios, so a Paladin or Druid tank that has both magic and physical abilities is ideal.

Vanish ability used by the rogue boss Veras Darkshadow. Cast roughly every minute and puts the boss in stealth mode for 30 seconds, where he will apply Deadly Poison to random raiders.

Deadly poison which is applied to random raiders while Veras is stealthed. Deals 1000 nature damage every second for 4 seconds. Veras will poison one player at a time.

Instant nature damage dealt to a player afflicted with Deadly Poison right after the debuff ends. Veras will use this ability while he is stealthed. Deals 4250 nature damage.

Lady Malande is in a way, the most important of the council members. She casts many spells all of which need to be interrupted, most importantly she casts Circle of Healing which heals all council members for 95000 health. Because the council has a shared health pool, it can be devastating if this spell is allowed to be cast. On top of that Malande has a variety of damaging spells which are all very good but not as critical to have interrupted. Because Gathios will frequently buff Malande with either Blessing of Protection or Blessing of Spell Warding, you will need both a physical interrupt and a magical interrupt assigned to Lady Malande in order to keep her spells under control. Finally, she will periodically buff herself with a Reflective Shield which absorbs a large amount of damage and deals attackers to damage themselves equal to 50% of the damage absorbed by the shield. Damage dealers or interrupters assigned to Malande should be aware of this and be cautious when the shield is up to avoid killing themselves. The tooltip states that this ability prevents spell interruption from physical attacks, but that is not correct - Reflective Shield does not prevent any spell interruptions.

Very strong healing ability used by Lady Melande, healing all council members for 95000 health. Very important to interrupt every time it is cast.

Single-target damage spell used by Lady Melande. Deals 5000 holy damage initially and 2500 holy damage every 2 seconds for 8 seconds. Very good to interrupt this spell to prevent it from happening.

Self buff used by Lady Melande that absorbs 25000 damage. Also reflects 50% of all damage absorbed back to the attacker.

High Nethermancer Zerevor should be tanked by a  Mage and mostly left alone for the duration of the fight. The player mage can use Spellsteal to take a ultra-powerful version of Dampen Magic that the High Nethermancer uses on themselves. This will allow the mage player to tank the Nethermancer boss from a safe distance and not take too much damage. If any players approach the Nethermancer, the boss will begin using Arcane Explosion dealing around 8500 arcane damage to all players within 10 yards.

The High Nethermancer will also use Flamestrike and Blizzard on random players in the raid. All players should be aware of these and ready to move out of them very quickly to avoid excessive damage.

Area of effect damage ability that the boss will use if any players get too close to High Nethermancer Zerevor. Deals 8500 arcane damage to all players within 10 yards of the boss.

Ultra-powerful version of dampen magic which is used by High Nethermancer Zerevor. Reduces magic damage taken by 75% but also gives a flat -500 to all healing received. A mage player can use Spellsteal to take this buff, enabling the mage player to safely tank the High Nethermancer.

Primary damaging attack used by the High Nethermancer when no players are in melee range. Deals 12950 arcane damage to a single target with a 2 second cast time.

Area of effect damaging spell used by High Nethermancer. This will target random areas in the room, so all players will need to be aware of it and quickly move away. This super-Flamestrike deals 4625 inital damage in an 8 yard radius, and then 2806 additional damage every 2 seconds for 12 seconds.

Area of effect damaging spell used by High Nethermancer. This will target a random area in the room and deal 4375 damage every 2 seconds to players who stand in it, so be sure to quickly move away!

Gathios the Shatterer is a paladin-like enemy and will be the main target for most of the raid's damage dealers. He can use Blessing of Spell Warding and Blessing of Protection on any of the other council members, making it not very good to target them for damage. Gathios will also alternate between Devotion Aura and Chromatic Resistance Aura, each lasting 30 seconds. It is good to take Gathios far away from the other council members so that they are not buffed by these auras. Gathios will also use Seal of Blood, Seal of Command,Judgement of Blood, & Judgement of Command which all additional damage deal to the tank. A Warrior tank can use Spell Reflection to negate  Judgement of Command which makes a Warrior a very good choice to tank this boss. Finally, Gathios will periodically use Consecration, requiring him to be frequently moved to avoid the area damage from that spell.

Gathios blesses one of the council members with a spell shield, making them immune to all magic effects for 15 seconds.

Gathios blesses one of the council members with a physical shield, making them immune to all physical attacks for 15 seconds.

Gathios can use Judgement of Blood on the player tanking him, dealing 1200 holy damage every second for 9 seconds.

Gathios can use Judgement of Command on the player tanking him, dealing 6175 - 6825 holy damage. A  Warrior tank can use  Spell Reflection to negate this.

Gathios will periodically consecrate the ground around him, dealing 2250 holy damage every 3 seconds to players who remain on the consecrated ground. Lasts 20 seconds.

Occasionally cast by Gathios to give all nearby council members +20% armor for 30 seconds.

Occasionally cast by Gathios to give all nearby council members +250 resistance to all schools of magic for 30 seconds. 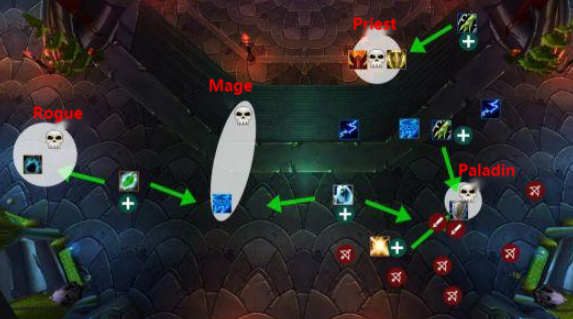 There are too many accidents in the long-term battle

① The station is shown in the figure: Since the four bosses share the health pool, you can fight any of them, but the rogue will vinish, the priest will have shield, and the mage cannot get close, so we generally choose to hit the paladin that can maintain the output continuously.

1.5 seconds to read the bar, reducing the target's maximum HP by 60% for 7 seconds. This skill will not miss, but can be blocked, Dodged, or Parried; 10 seconds CD.

1.3 seconds reading, Illidan leaps high and casts a blue fire ring at the foot of the current target with a range of 8 yards, dealing about 1000 fire damage, and then receiving 5000 fire every 2 seconds in the fire ring Fire damage; 20 seconds CD.

1.5 seconds reading, dealing about 5000 damage to all targets in the frontal cone. If there are more than 1 target, each additional player will restore 100000 HP to Illidan; casting frequency is low.

Illidan will put this debuff on random players, he will receive 3000 shadow damage every 2 seconds. After 10 seconds, 2 parasitic shadowfiend with 3500 HP will spawn under the player's feet, and they will continue to attack the player with the highest aggro. The player is parasitic. Illidan will have this skill when his HP is lower than 90%, with built-in CD within 25 seconds, and more frequently in P5 stage.

Casts a green flame in a 10-yard range at the foot of the current target, taking 5000 fire damage per second within the flame; wear flame resistance.

Spit fire within 10 yards of the frontal cone, dealing 7000-9000 fire damage; wear flame resistance, turn your back to the crowd.

This ability is cast when a player is more than 35 away from Flame of Azzinoth.

After both Flame of Azzinoth died, the two warglaiveses returned to Illidan.

Illidan will periodically cast two eye beams which damage all targets in a line for massive impact damage and then leave behind a persistent blue flame which deals around 5000 fire damage per second to any player standing in the flame.

Take 2000 damage 2 times per second within the flame.

2 seconds reading, dealing about 3000 damage to random players and players within 10 yards around them.

Cast on a random player, dealing them to suffer 3000 Shadow damage per second for 10 seconds; this skill appears very rarely.

The stage P3 has all the skills of the stage P1.

Every 75 seconds, Illidan transforms into a demon form for 75 seconds.

2 seconds reading, dealing 9000-1000 Shadow damage to the current target and all players within 20 yards around it.

·Paralysis: Each of the 4 Shadowfiend randomly selects a player to connect to, and moves towards it, the connected player falls into a stun state.

Aura of Dread[Healing] [Stay Away]:

Dealing 1000 damage to players within 15 yards, and also increases their shadow damage taken by 30%, effectively dealing 1300 damage every 2 seconds to those players.

Stage P4 has all the skills of stage P3, including transformation; when entering P4, illidan must be transformed into human form.

In phase 5 Illidan gains the ability to periodically Enrage, increasing damage dealt by 50% and attack speed by 30% for 20 seconds.

Illidan enters a weak state for 15 seconds after stepping on Maiev Shadowsong's trap, he cannot move at this time, and he takes 100% more damage.

shadowfiend scamper, flame resistance tank is hitted by Eye Beam,the group messed up in demon stage, tank died in enrage. Multi-stage battles are more complicated, and the damage are relatively high, and the key points cannot be wrong. 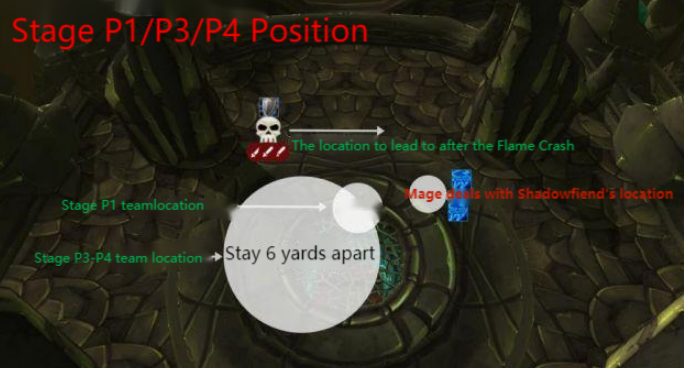 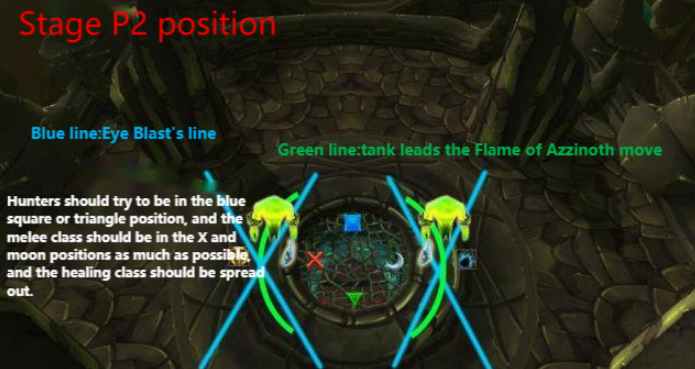 ① The BOSS is simplified into four stages, which makes it easier to understand. For new player, please refer to the station map.

In the stage P1, there is not much to say, warrior tank or paladin tank take damage to deal with Shear, pay attention to avoid the Flame Crash; DFP can start outputting at this time.

② The player is hitted by Shadowfiend go out of the crowd by themselves, and deal with them.

③ In the stage P2, quickly stand according to the assigned position. The idea of position assignment: hunters do not approach the warglaiveses, heal class scattered stations, and melee class stand behind. DPS can do your best to output.

④ For tanks, turn your back to the crowd when keeping Flame of Azzinoth’s aggro , take a step after spewing the fire, and then adjust it so that it faces away from the crowd; don't be afraid to take damage with full flame resistance, any remaining flames on the ground can be stepped in.

⑤ The Eye Blast is drawn in the picture. They always cut from the outside to the inside, just two fixed lines.

⑥ In the stage P3, keep a five-yard distance and spread out, and when the Tank lure illidan to the position, DPS can be launched. The fast group will be reduced Illidan's health below 30%, and the general group will stop in 75 seconds, and the transformation will clear the aggro.

⑦ After the transformation, the big group continued to spread out for 5 yards, and the warlock tank left the crowd 20 yards away to keep aggro; after the BOSS cast Shadowfiend, everyone turned the flame at the first time, starting from the shortest line, 20,000 blood for one, very easy to kill.

⑧ In the stage P4, the BOSS start Enrage, so don't die with tank skills. When Maiev Shadowsong sets the trap, try to lead Illidan into the trap.

⑨ The Illidan's HP is not high, and it is similar to cycle the demon stage twice.